Managing cookie setting
In order to offer you an optimal experience with the site, we use cookies. These are small text files that are saved on your computer. These include cookies for the operation and optimization of the page, as well as for services such as text or video chat, as well as for advertising based on your behavior on the Internet. For example, you can find out if you visit our website several times from the same device. We want to give you a choice of which cookies you allow:
Mandatory cookies
These cookies are necessary for navigating pages and using basic functions
necessary
Analytical cookies, marketing cookies, services of other companies (independent third-party providers)
Analytical cookies
These cookies help us better understand user behavior.
No
Yes
Marketing cookies
These cookies and similar technologies are used to display personalized and therefore relevant advertising content.
No
Yes
Privacy policy
FAST DELIVERY
BUYER PROTECTION
PRIVACY
Order status
‹ Return to search results │ Home  >  Summer tyres  >  30x9.50 / 15  >  ...  >  Nankang NK 4X4WD M/T FT-9 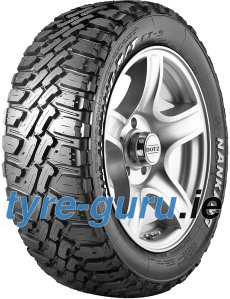 Please note: Prices apply to tires without rim. Depending on the tire dimension, the tread pattern may vary.

Thanks to its extra large shoulder lugs for enhanced shoulder traction, Nankang FT-9 is competitive over rocky, muddy, uneven and harsh surfaces, on which its interlocking shoulder block design enhanced grip besides exclude screes and clods for better manoeuvrability.

The technical tread patterns on Nankang FT-9, hook-shaped block, z-shaped zigzag grooves and the prominent bar on the bottom of the grooves, are even designed to give extra traction in superior off-road conditions.

Interlocking shoulder block design can grip and exclude screes and clods to increase manoeuvrability, and allow the car to be navigated freely on rugged roads. Hook-shaped blocks can gripping thrust on screes and clods. The blocks extended to tread shoulders provide extra traction between blocks and screes.

The prominent bar on the bottom of the grooves prevents stones are ledged in the grooves. Lodged stones will be expelled by the flexible moves between the prominent bar and the groove wall. Z-shaped zigzag grooves mill the clods and adapt to all kinds of rugged roads.

*Prices include VAT and delivery within Ireland. Free shipping only for 2 or more tyres.
**More than 90% of our orders reach the customer in the specified delivery time.
***Consult the Terms and Conditions page (section 5) for more details
****Visit the Fitting Station Partner page to check the nearest fitting station
Return to search results