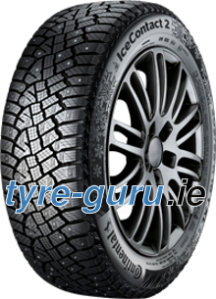 We only supply the tyre. If there is a rim shown in the picture, it is for display purposes only.

Tyre size
245/60 R18 105T, SUV, studded
Change
Stock Level:
at the moment, this product is not in stock
Type of Tyre:
Winter tyres

Superb performance on ice for passanger cars and SUVs. Safe in any extreme.

The new IceContact 2 from Continental marks a further improvement on the already excellent qualities of its predecessor. Handling on dry roads has been improved by nine percent and handling on ice by two percent.

The IceContact 2 also offers better handling on snow. On ice, the biggest improvements are in braking and traction performance, which have been improved by eight percent. All other safety-related aspects of the new winter tire with innovative stud technology match the high standards of its popular predecessor.

The IceContact 2 also features a new, asymmetric tread pattern. The new studs are 25 percent lighter than those used on the previous version of this tire. This means that depending on tire size, the new tire can now be fitted with up to 50 percent more studs.

The offset arrangement of the studs means that they always make contact with fresh ice, rather than ice that has already been churned up by other studs – for significantly improved grip. To prevent the formation of layers of ice around the studs, the Continental engineers have developed what they call “ice pockets” – small, closed reservoirs around the studs in which the crushed ice can collect before being expelled by centrifugal force. This delivers significant safety benefits, particularly when braking.

To prevent studs becoming detached from the tire while driving, Continental is the first manufacturer in the world to have developed a special technology that anchors the studs much more firmly in the tire. The studs, each with a small “base” consisting of bonding agent, are inserted in the tire by a special robot. In the next stage of the production process, the studs are then bonded to the tire under specific temperature conditions. This ensures 400 percent firmer fixing of the studs than is possible with conventional processes. Each stud can withstand tensile forces of up to 500 N (50 kg) without being pulled out of the tire.

*Prices include VAT and delivery within Ireland. Free shipping only for 2 or more tyres.
**More than 90% of our orders reach the customer in the specified delivery time.
***Consult the Terms and Conditions page (section 5) for more details
****Visit the Fitting Station Partner page to check the nearest fitting station
Return to search results